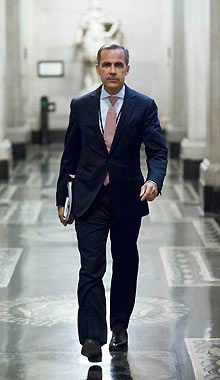 This policy move follows recent data which suggests the economy has held up well, with the services sector returning to growth in August after July’s contraction and the construction sector defying expectations of a drop in output.

Policymakers have said the immediate impact of Brexit on the economy isn’t as bad as first feared.

However, the minutes from this weeks meeting suggested, that a further cut to an unprecedented 0.1% could come as soon as November which will be dependent on how the economy fares post-Brexit.

The Bank’s Monetary Policy Committee said it expects ‘less of a slowing in UK gross domestic product growth’ in the second half of 2016.

The Bank added the economy was still set to suffer a ‘material slowing’ in growth, with internal estimates suggesting growth will slow to between 0.2 per cent and 0.3 per cent in the third quarter.

That will be a sharp slowdown on the 0.6 per cent growth seen in the previous three months, but still not as bad as the Bank had feared in its August forecasts, when it said growth was set to flat line between July and September.

The Bank said recent closely-watched industry data suggesting that major sectors of the economy rebounded strongly in August had been stronger than expected and were ‘consistent with somewhat less of a slowing in near-term GDP growth’.

It noted that it had overshot on inflation forecasts, and was expecting a smaller rise in the consumer prices index over the second half of 2016.

Inflation held steady at 0.6 per cent last month, but the Bank is still pencilling in a rise to around the 2 per cent target in the first half of next year.